Night of the Chicken: The Curse of the Crusty Claw

Night of the Chicken: The Curse of the Crusty Claw 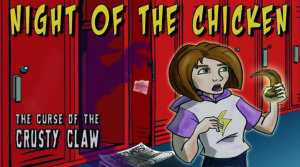 When a science experiment gone wrong first turned Andrea (Andi) Hafferton into a teenage werechicken, she thought she had it pretty bad. Now, three episodes later, things are even worse! Andi is forced to give a disastrous pep rally speech, Taco Tuesday gets cancelled, and someone lays an egg and blames it on her! Meanwhile, she still has to keep everyone at Ronald Reagan Junior High from discovering her monstrous secret.

Written by Carrie Behrens and directed by Kim Porter. The fourth installment of this radio play series will be performed onstage with live sound effects. Bring your kids or bring a date. This quirky show is fun for all ages.

And technical help from:
Colette Porter-Kaplan