Leave your sensitive poetic side at home, because we’re mercilessly mocking the languid, melancholy lyricist in all of us tonight. Comics will read their original sonnets, haikus, and villanellas, as well as some musty old classics and found poems, fresh off the bathroom wall. As always, this will be a bring your own absynthe event.

S&M Comedy Presents is a monthly late-night series of creative live shows conceived by Jamie Sanderson and Steve Marek in order to challenge comedians and bring variety to the PHX Comedy Scene. Holding these performances at a small, inexpensive locally-owned theater enables the concepts to be fully appreciated by a diverse audience without the distracting drunkards at a bar show or the overwhelming cost of a night at a comedy club. 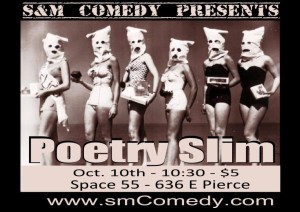