Banned and Burned – a Reading of Edward Albee’s The Goat

Saturday, November 22 at 8:00pm. Free (but donations are gratefully accepted).

Albee’s play about Martin, an architect who, to the horror of his family falls in love with a goat, won the Tony award and Drama Desk Award for best play, was nominated for the Pulitzer, but continues to disturb and confound both producing organizations and audiences.  While not advocating for Martin’s choices, the play has been banned and refused productions merely because of its subject matter, most recently in Mesa, Arizona.  Join us for a reading of this powerful script, followed by a discussion of the play’s ideas and whether hearing them is so dangerous to our well-being. 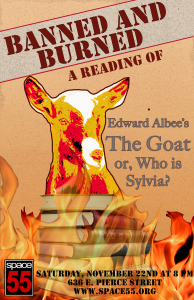