Local comedian Matt Storrs is known for bringing his law background to the stage, especially when fact-checking other comedians’ material after their sets. “The Storrs Objection” will now give Matt the opportunity to fact-check other comedians’ material DURING their sets. Along with the Torch Theatre’s Bill Binder, Matt Storrs will be rebutting and rebuking comedians in the middle of premise and punchline, throwing off timing and train of thought, and maybe starting a fight or two. “The Storrs Objection” is heckling with a wrecking ball.

S&M Comedy Presents is a monthly late-night series of creative live shows conceived by Jamie Sanderson and Steve Marek in order to challenge comedians and bring variety to the PHX Comedy Scene. Holding these performances at a small, inexpensive, locally-owned theatre enables the concepts to be fully appreciated by a diverse audience without distracting drunkards at a bar show or the overwhelming cost of a night at a comedy club. 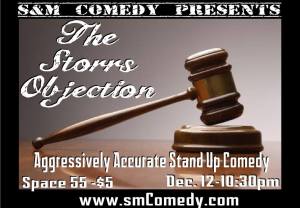