Local comedian Matt Storrs is known for bringing his law background to the stage, especially when fact-checking other comedians’ material after their sets. “The Storrs Objection” will now give Matt the opportunity to fact-check other comedians’ material DURING their sets. Along with this monthly co-council, Matt Storrs will rebut and rebuke comedians in the middle of a premise or punchline, throwing off timing and train of thought, and maybe starting a fight or two. “The Storrs Objection” is heckling with a wrecking ball. 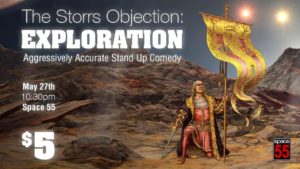 This month’s topic is Exploration!

Matt’s co-counsel will be Michael Longfellow.