The Revival: Featuring Birds & Broads with The Displacers & Genevieve Rice

The Torch Theatre revives its roots at Space 55 by bringing longform improvisation back to downtown Phoenix for one night a month. Every third Saturday these two theaters join together to bring you The Revival. The show will feature some of The Torch Theatre’s hungriest groups who will create completely unscripted performances along with a few surprises in between.

Host & Headliner: Birds & Broads
Jacque Arend & Liz Hutchman
Performing together for almost two years as a duo, these ladies create a single location scene exploring the characters and relationships that inhabit that location during a moment in time. Last year they found success by winning the 2014 Torch Theatre PIMMP Tournament.

Opening Group: The Displacers
Sam Haldiman, Chris Hooper, Rick Grove, Sara Palmer, Shane Carey, Dana Whissen, Eric Storie & Alisha Ratan
Performing together for over two years – the Displacers is one of the Torch Theatre’s largest ensembles. They performed last year at The Phoenix Improv Festival and will be returning again this year. The Displacers present the Harold, an improv structure that is the foundation for all longform improvisation used in improv training centers around the country such as IO & UCB.

Bonus Entertainment: Stand Up Comedian GENEVIEVE RICE
Genevieve Rice is a stand up comedian both loved and feared by many for her wry humor and elegantly wacky sensibility. Her career has taken her many places. In 2010, she started The Snark Show, a meta comedy show with a roast panel. In 2014, she launched The Living Room, a comedy show in her own home. An avid Internet user, the Phoenix New Times’ nominated Genevieve as Best Phoenician to Follow on Twitter. 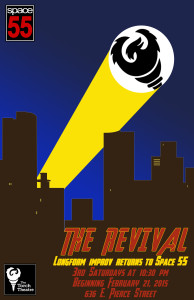