Bad Buddhist: A trip through the divine and the absurd

Dan “Hoen” Hull is a stand up comedian, teacher, storyteller, DJ, and a Buddhist. And we mean, a real Buddhist. Not like that guy in your office who says he’s a Buddhist because he learned about it in a world religions class back in college and thought it sounded easy.

Hull has dedicated a huge part of his life to Buddhism. He went through training, years of mediating, was ordained as a Soto Zen Monk, made his own robes, and even managed to piss off a hundred-year-old Zen Buddhist master.

All of these stories and more are part of his solo performance as Hull returns with an encore performance of last year’s hit “Bad Buddhist.” 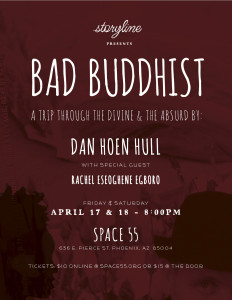