The Bakers of Lakewood

The Bakers of Lakewood, a spellbinding drama by Philip Egan Schmiedl, will make its world premiere at Space 55 in May.  The original production features Patti Hannon, star of the long-running hit Late Nite Catechism, and Shawna Franks, artistic director of Space 55 and the actress who originated the role of Dottie in Killer Joe by Pulitzer Prize-winning playwright Tracy Letts in Chicago and London’s West End.  The production also features Clifton Highfield, an accomplished improviser with Torch Theatre who is making his first acting appearance at Space 55.

The Bakers of Lakewood is the haunting story of a compulsive mother and her browbeaten son who are bound by their tragic past, and the brash woman who threatens to come between them.  The world premiere at Space 55 completes a creative journey that spans more than a decade and 2,000 miles. The story originally was developed by Schmiedl as a 10-minute play at the Actors Studio Drama School in New York City with a cast that featured actress Brandy Hotchner.  Schmiedel continued to develop the play, and in 2009 Hotchner directed a workshop production of the full-length work-in-progress at Space 55.  Hotchner also directs the world premiere production. 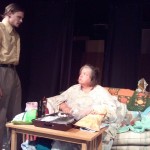 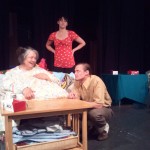 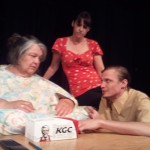 Tickets are available at the door on the night of the performance.  Tickets may also be purchased online or by calling 866-811-4111.

Thank you to Arizona’s own The Lil’ Cake Shoppe for baking the delicious cakes for The Bakers of Lakewood!