Frank and Jen are theatre students at a second rate college and live together in a small apartment. Frank’s favorite past time is discussing how the world has become corrupted by commercialism, while Jen’s is smoking pot and yelling at Frank. Their already strained relationship is further complicated when it is discovered that the natural world has suddenly disappeared and has been replaced by “nothing”. What’s left is their apartment and a constant bombardment of advertisements coming from the radio, T.V. and phone. When Jen’s overbearing mother Valery comes baring gifts of, anti-depressants, Gucci and God the situation becomes hilariously chaotic. While Valery tries to reunite Jen with her ex-boyfriend the doctor/lawyer, Frank must decide how to hold on to his beliefs while the world around him spirals into superficiality.

Admission is donation only. 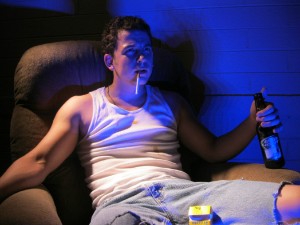