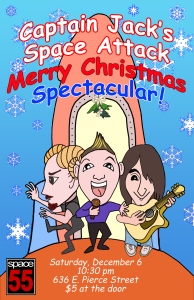 Space 55’s late night show returns with more of the adventures of Captain Jack and his band, Space Attack as they explore the galaxy searching for a new home after the destruction of Earth in the year 3013. Accompanied by Mozambique, the Queen of former Earth and a self-proclaimed radical lesbian feminist; Dr. Bendo, a half-human possessing all knowledge and zero emotion; and the polymorphous cultural envoy Viscount Earle. Fortunately for all aboard, the ship has a mind of its own, the Motherboard, who watches over all. Also featuring a revolving cast of the denizens of whatever planet(s) are featured in each episode, and audience participation. Live music! Drinking songs! Meteorite attacks! Happiness ensues.

“…loud and fast and insane, like a memorable weekend.”
– Julie Peterson, The New Times