Alfred Jarry’s absurdist classic returns to the Space 55 stage for its 10th anniversary season! What to expect during Ubu Roi? It’s the time-honored story of what happens when a big fat idiot is put in charge of a country, with lots of war, blood, guts, food fights, magic, shouting, puppets, chaos, hilarity, horror and the just plain bizarre sprinkled into the mix. 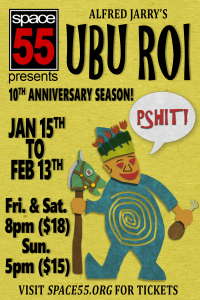